In Australia, all this changed after Federal Court Justice Trevor Morling handed down a judgment on 7 Feb 1991, finding that second-hand smoke causes lung cancer in non-smokers and asthma attacks, as well as respiratory disease in children.

The case was the Australian Federation of Consumer Organisations Inc (AFCO) versus the Tobacco Institute of Australia Limited (TIA).

“The decision was the first of its kind by a superior court anywhere in the world” noted Professor Peter Le Souëf (Professor of Paediatrics, University of Western Australia).

“The success of this collaboration between medical experts and lawyers to counteract the efforts of the tobacco industry to deny scientific evidence was one of the most important milestones in the history of reducing rates of smoking” said Professor Le Souëf. 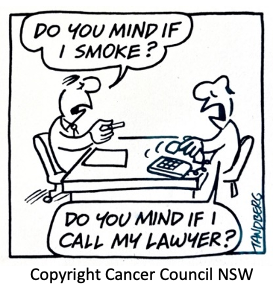 Professor Le Souëf was the first witness in the court case providing expert testimony on the damage to children’s health from exposure to second-hand smoke. The 30th anniversary of the decision is acknowledged this week in an essay in the UK medical journal The Lancet written by Neil Francey who acted as Counsel for AFCO throughout the legal proceedings.

The litigation arose from TIA publishing an advertisement in major Australian newspapers on 1 July 1986 making the claim that “there is little evidence and nothing which proves scientifically that cigarette smoking causes disease in non-smokers”.

The timing of the tobacco industry advertisement was an attempt to undermine the 1986 report on passive smoking by the National Health and Medical Research Council (NHMRC) in Australia.

Other international reviews of the evidence on second-hand smoke from 1985 to 1988[i] built on landmark studies published in 1981[ii] which found that exposure to second-hand smoke is a cause of lung cancer in non-smokers.

“We’re not yet living in a smoke-free environment in 2021, despite the overwhelming evidence on the dangers of second-hand smoke” said Professor Le Souëf. “Opportunities remain to realise the many benefits of smoke-free policies in areas such as beer gardens in licenced premises, crowded outdoor areas, government-supported housing and multi-unit residences”. [iii]

“Why did I, as CEO of under-resourced AFCO, push its board to agree to take on the tobacco industry?  Many in the consumer movement thought it a pretty crazy enterprise with little chance of success, a wasteful diversion of resources from our core business and that it clearly risked the end of the organisation.  Their view was reasonable, but some of us saw the potential upside of changing public policy on tobacco and saving lives in Australia and beyond as worth it.

“Why was AFCO the actor in this?  Why not the specialist organisations like Action on Smoking and Health and the Heart Foundation?  Well, they didn’t have a focus on consumer law and didn’t see that it could be used in this way.  Of course as soon as we got going they were fully engaged  collaborators.

We did have a secondary motive – to push the national consumer protection agency to “be a better consumer protector – it had lapsed badly under the chairmanship of Bob McComas (Chairman WD and HO Wills Holdings from 1992-1996). As well as the main outcome of boosting government tobacco regulation the case proved the importance of private rights of action in consumer and other legislation and of effective citizen organisations in keeping statutory regulators up to the mark. AFCO really only kicked off this project.  It would have got nowhere without the huge contributions of Neil Francey and the other lawyers and health specialist witnesses.”

[i] International Agency for Research on Cancer Monographs on the Evaluation of the Carcinogenic Risk to Humans: Volume 38 Tobacco Smoking. 1985

US Department of Health and Human Services’ The Health Consequences of Involuntary Smoking: A Report of the Surgeon General. 1986

UK Fourth Report of the Independent Scientific Committee on Smoking and Health. 1988