YOU CAN’T BELIEVE A WORD THEY SAY

Smoking will cause 7 million premature deaths worldwide this year.

International consultants McKinsey have rated tobacco as first among the global social burdens generated by human beings, ahead of “armed violence, war and terrorism”.

The primary focus of the submission from PML is to convince the Select Committee to recommend that Australia should set aside its existing regulatory processes through the Therapeutic Goods Administration and introduce a new regulatory framework that would treat their so-called ‘Reduced Risk Products’ as consumer goods to make them more freely available.

The tobacco industry has historically employed a multitude of tactics to influence and shape government policies that affect tobacco marketing and consumption. There is extensive documentation of the tobacco industry using its economic power, lobbying and marketing machinery, and manipulation of the media to discredit scientific research and influence governments to minimise restrictions on the promotion, distribution and sale of its products and oppose or delay other measures that are likely to reduce tobacco use. These tactics continue today.

As a signatory to the World Health Organization Framework Convention on Tobacco Control (WHO FCTC), the Australian Government (along with all State and Territory governments) has a commitment to Article 5.3:

“in setting and implementing their public health policies with respect to tobacco control, Parties shall act to protect these policies from commercial and other vested interests of the tobacco industry in accordance with national law”.

Why do we need to protect public health policy from interference by Philip Morris?

Because Philip Morris and other tobacco companies have a 70-year history of deceit and lies about the health effects of smoking, as part of a deliberate strategy to keep smokers smoking, while at the same time continuing to recruit children and young people to smoking.

Why would anyone take their comments on health matters seriously?

Set out below are a few examples of their egregious behaviour.

In 1994, Tobacco Company CEOs, including the Philip Morris CEO, testified before the US Congress saying that smoking is not addictive. 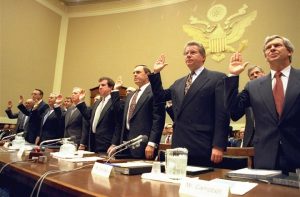 In a landmark 2006 judgment, U.S. District Judge Gladys Kessler found the major U.S. tobacco companies had violated civil racketeering laws (RICO) and engaged in a decades-long conspiracy to deceive the American public about the health effects of smoking and their marketing to children. Among her remedies, Judge Kessler ordered the tobacco companies to publish “corrective statements” that tell the American public the truth about the deadly consequences of smoking and second-hand smoke.

Tobacco companies, including Philip Morris, fought for more than 11 years to delay and weaken the corrective statements, but finally began to publish the court-ordered statements through newspaper and television advertisements in November 2017.

To prevent continued deception, Judge Kessler ordered the tobacco companies to publish the corrective statements on five topics about which they had deliberately deceived the public:

Despite the overwhelming wrongdoing she found, Judge Kessler was constrained in the remedies she could impose on the tobacco industry because of a controversial appeals court ruling that restricted financial remedies under the civil RICO law. In addition to the corrective statements, Judge Kessler imposed remedies that:

This case and the corrective statements are a reminder that tobacco’s horrific toll is no accident. It stems directly from the tobacco industry’s deceptive and even illegal practices. As tobacco companies now seek to portray themselves as responsible corporate citizens working to curb smoking, this case reflects that they are the root cause of the problem.

Philip Morris Limited’s submission to the Select Committee is misleading

In its submission to the Select Committee PML says:

“We wish to share with committee members our vision for a smoke-free future, where an appropriate regulatory framework for smoke-free alternatives could help millions of Australian smokers who would otherwise continue to smoke switch to less harmful alternatives than cigarettes.”

However, Philip Morris’ record demonstrates that it is committed to growing the market for both combustible and non-combustible tobacco products, targeting adults, young people and other vulnerable groups.

PMI says that they are: “committed to doing our part to help prevent children from smoking or using nicotine products”.

They further state that their “marketing complies with all applicable laws and regulations, and we have robust internal policies and procedures in place so that all our marketing and advertising activities are directed only toward adult smokers”.

Despite these assurances, PMI has been accused of, and fined for, running marketing campaigns that target young people.

In 2014, PMI was fined more than US$ 480,000 in Brazil over its ‘Be Marlboro’ campaign, which has been strongly criticised for deliberately targeting youth. The campaign was first launched in 2011 in Germany to promote PMI’s revamped Marlboro brand, and was rolled out in more than 50 countries. Germany banned the campaign in 2013, reportedly ruling that “[the ads] were designed to encourage children as young as 14 to smoke”.

Philip Morris has aggressively opposed all effective tobacco control policies, such as curbs on advertising, graphic health warnings, increases in tobacco tax, and plain packaging, and continues to promote smoking in developing countries.

PML challenged Australia’s plain packaging legislation all the way to the High Court but were comprehensively defeated.

In the UK, leaked internal PMI documents also revealed the extent of a multi-faceted campaign against Plain Packaging in the UK, including a detailed media campaign using dozens of third parties (both individuals and organisations) to promote its arguments against the policy. The documents also included a detailed political analysis of potential routes of influence for the tobacco company.

Just last year PMI lost a six-year investment treaty arbitration with Uruguay, in which the company spent approximately US$ 24 million to oppose large graphic health warnings and a ban on misleading packaging in a country with fewer than four million inhabitants.

A huge investment in the world’s leading e-cigarette brand

The parent company of Philip Morris USA, Altria, has just invested $US 12.8 billion in JUUL, the vaping product that has spearheaded 20% of US teens using e-cigarettes in the last 30 days.

JUUL is a sophisticated e-cigarette shaped like a thumb-drive that efficiently delivers nicotine by way of innovative chemistry (nicotine salts) enabling higher concentrations in a limited aerosol plume.

“The numbers are clear – we’re experiencing epidemic level rises in youth e-cigarette use, which is threatening the progress we’ve made toward reducing youth tobacco use. These trends require forceful and sometimes unprecedented action among regulators, public health officials, manufacturers, retailers and others to address this troubling problem,” said Dr Scott Gotlieb FDA Commissioner.

“I, Surgeon General of the United States Public Health Service, VADM Jerome Adams, am emphasizing the importance of protecting our children from a lifetime of nicotine addiction and associated health risks by immediately addressing the epidemic of youth e-cigarette use. The recent surge in e-cigarette use among youth, which has been fuelled by new types of e-cigarettes that have recently entered the market, is a cause for great concern. We must take action now to protect the health of our nation’s young people,” said US Surgeon General Jerome Adams.

In our country the latest evidence comes from the 2017 Australian Secondary Students’ Alcohol, Tobacco and Drug survey. This survey’s results released recently by the Australian Government show that 48% of students who had vaped reported they had never smoked a tobacco cigarette before.

The increasing use of e-cigarettes by young people who have not previously used traditional cigarettes cannot be used to argue in favour of making so-called ‘Reduced Risk Products’ more freely available.

What has the World Health Organization said about Philip Morris’ claims to promote harm reduction through its Smoke Free Foundation?

“On 13 September 2017, tobacco company Philip Morris International (PMI) announced its support for the establishment of a new entity – the Foundation for a Smoke-Free World. PMI indicated that it expects to support the Foundation by contributing approximately USD 80 million annually over the next 12 years.

Article 5.3 of the WHO Framework Convention on Tobacco Control (WHO FCTC) obliges Parties to act to protect public health policies from commercial and other vested interests of the tobacco industry in accordance with national law. Guidelines for implementation of Article 5.3 state clearly that governments should limit interactions with the tobacco industry and avoid partnership. These Guidelines are also explicit that Governments should not accept financial or other contributions from the tobacco industry or those working to further its interests, such as this Foundation.”

What about PMI’s new heat not burn products? 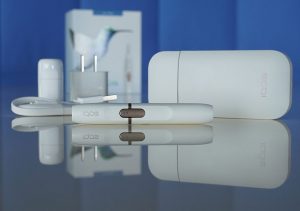 PMI’s latest so-called ‘harm reduced’ product IQOS (I Quit Ordinary Smoking) has been submitted to the US Food and Drug Administration for approval so that it can be sold in the US.

The claims made by PMI have been carefully examined by one of the world’s leading tobacco and health researchers, Professor Stanton Glantz, Director, Center for Tobacco Research Control & Education, University of California, who has concluded:

“As someone who has worked in tobacco control for decades, I ploughed through the application to see what information Philip Morris presented. To my surprise, I found (and told the FDA) that Philip Morris’s own application shows that in American people there is no statistical difference in the harm caused by IQOS product and traditional cigarettes.”

A recent paper by Professor Glantz confirms that there is no detectable difference between the biomarkers of potential harm generated by the use of IQOS compared to those generated by conventional cigarettes.

Public Health experts have also expressed concern that the IQOS contains a computer chip that captures data and records an individual’s smoking behaviour including the number of puffs taken on the device. Professor Gregory Connolly from the Northeastern University in Boston has said, “What they’re going to have is a mega database of how Americans smoke … Then they’ll be able to reprogram the current puffing delivery pattern of the IQOS to one that may be more reinforcing and with a higher addiction potential.”

Clearly, these so-called ‘Reduced-Risk Products’ that are being manufactured and promoted by Philip Morris in other countries are not ordinary consumer products.

In areas where risks and harms need to be considered as well as potential benefits, adherence to the evidence is critical – evidence that can only be collected, reviewed and reported through a rigorous framework, which considers overall population health.

The NHMRC, the Australian Government’s premier health advisory body, has for example, provided the following advice in regard to e-cigarettes:

“E-cigarettes may expose users to chemicals and toxins such as formaldehyde, heavy metals, particulate matter and flavouring chemicals, at levels that have the potential to cause adverse health effects.”

Australia has a long-standing system for addressing products such as IQOS and e-cigarettes and anyone wishing to sell or market them should take them to the TGA with evidence of safety and efficacy; it is then for the TGA to examine that evidence and make a determination. Philip Morris, like any other company, should take their products to the TGA – not lobby for ways of bypassing that process.

It is important to recognise the NHMRC and TGA’s independence, their findings, and their research, evaluation and advisory roles more broadly on matters of public health and medical science.

Big Tobacco rarely, if ever, admits to the death and disease caused by smoking

Time to talk about phasing out the sale of tobacco products