Since the early 1990s, Governments in Australia have progressively enacted legislation to reduce the devastating impact that tobacco products and smoking has had on public health. As evidence of the health effects accumulated, health authorities and the media increased their pressure on governments to introduce tougher tobacco controls.

There have been many advances in Australia and worldwide to make motor vehicles, especially when carrying children, smoke free by law.

Exposure to passive smoking, particularly in confined areas such as cars, is known to be hazardous to health – especially children. Opening the car window or using the car air-conditioning or fan isn’t enough to stop the harmful effects of smoke on children. There is no ‘safe’ level of secondhand smoke exposure. Health harm to children from secondhand smoke includes asthma, bronchitis, SIDS and meningococcal disease.

All states, except the Northern Territory, have implemented legislation to protect children from tobacco smoke in cars.

May 31, 2007 – South Australia became the first Australian state to enact a ban on smoking in vehicles when children under 16 years are present. This ban applies to both the driver and passengers and when the vehicle is either moving or stationary. Police officers and tobacco control officers have authority to enforce this law by issuing a fee of $75 and maximum penalty is $200.

January 1, 2008 – Tasmania’s ban on smoking in vehicles if a person under the age of 18 years is inside the vehicle came into effect. A police officer or other nominated officer has the authority to enforce the law by issuing a fine up to $110. Smoking is also banned in work vehicles used during the course of employment if another person is present.

July 1, 2009 – New South Wales implemented a smoking ban in cars carrying someone under the age of 16 years. There is an on the spot fine of $250 for drivers or passengers, with a maximum fine of $1000 if disputed.

January 1, 2010 – Victoria implemented a ban on smoking in motor vehicles with children under 18 years. The maximum penalty for an individual breaking the law is an on the spot fine of $233.

January 1,2010 – Queensland banned smoking in cars carrying children under the age of 16 years. Police enforce this law, and anyone caught smoking in a vehicle where a child is present will be issued with an on the spot fine of $200.

September 22, 2010 – Western Australia’s ban on smoking in vehicles if a child under 17 years is present. WA Police officers are able to enforce the legislation and can issue on the spot fines of $200.

May 1, 2012 – the Australian Capital Territory made it an offence to smoke in a vehicle when a child under the age of 16 years is present. The law is enforced by ACT Policing who are authorised to stop motor vehicles and a $250 in the spot fine may be issued.

Since the beginning of March 2006 all tobacco products imported and manufactured for retail in Australia are printed with the new health warning labels. These new warnings provide smokers with information on an expanded range of health effects. In the case of cigarette packs, health warnings occupy 30% of the front and 90% of the back of the pack, with a graphic appearing on both the front and back.

Two sets of seven different health warnings are alternated every 12 months (Set A warnings were required from 1 March 2006 and Set B from 1 March 2007). This new rotation system is to increase awareness of the health effects due to smoking. As well as the graphic images and descriptive messages, the Quitline number and website are included on the packet.

To read about the background of plain packaging legislation in Australia click here and to view graphic warnings from other countries, click here.

As of 1 December 2012, cigarette packets sold in Australia have been confined to a drab olive green colour, with no corporate branding, and with 75% of the front displaying a graphic health warning.

For more information about plain packaging, please read the Health Warnings section of the Tobacco in Australia – Facts and Issues online resource. 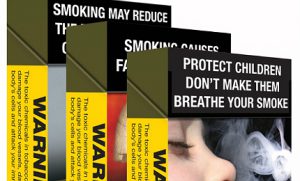 ‘I dreamed that it was possible, but we were really focused on making sure  it was successfully implemented here, and then be able to be use as an example in other countries.’

Hon Ms Nicola Roxon, former Attorney-General; Federal Minister for Health, received the 2017 Bob Elphick award for her contribution in implementing Plain Packaging in Australia. Hon Ms Roxon talks about the focus, dedication and attention to detail required to ensure Australia was successful as the first country to implement plain packaging, which has since set an example globally.

On 7 April, Federal Health Minister Nicola Roxon released a public exposure draft of legislation to make plain packaging of all tobacco products mandatory by July 2012. This announcement was in response to a key recommendation from the Preventative Health Taskforce report, the full report can be viewed here.

The pack is one of the remaining forms of tobacco advertising in Australia. By adopting plain packaging we can end this insidious way of attracting smokers.

The tobacco industry’s strong opposition to the legislation demonstrates how effective the industry knows plain packaging will be. Click here to view an advertising campaign on plain packaging supported by ACOSH and various other health organisations.

ACOSH was represented by Maurice Swanson at a public hearing who was joined by other health experts from the Australian Preventative Health Agency, the Cancer Council, Quit Australia, the National Heart Foundation and the Australian Health Department.  For more information, read the Advisory Report on the Tobacco Plain Packaging Bill 2011 and the Trade Marks Amendment (Tobacco Plain Packaging) Bill 2011.

Australia passed both laws on 10 November 2011. As of December 2012 Australia is a world first, with mandatory plain packaging of all cigarettes.

Benefits of the plain packaging and other useful information can be obtained from:

Plain packaging is a key part of Australia’s comprehensive package of tobacco control measures, which include:

A Post Implementation Review (PIR) was completed by the Department of Health in February 2016 and was assessed as compliant by the Office of Best Practice Regulation (OBPR).

The Review estimated that the 2012 packaging changes resulted in a statistically significant decline in the prevalence of smoking  [among Australians aged 14 years and over] of 0.55 percentage points over the post-implementation period.  The overall conclusion is that the tobacco plain packaging measure has begun to achieve its public health objectives of reducing smoking and exposure to secondhand smoke in Australia and it is expected to continue to do so into the future.

To read the PIR for the Tobacco Plain Packaging Act 2011 (the TPP Act) and associated regulations, please click here.

Products under the counter

On 3 May 2016, the Federal Government announced four 12.5% annual increases, pushing the price of cigarettes to $40 a pack by 2020, duty free cigarette allowance to be cut from 50 to 25, extra funds to support defence of plain packaging in trade disputes and $7.7m to strengthen Border Force to tackle illicit tobacco

Increasing price is the single most effective way for governments to reduce the prevalence of smoking. The increase in 2010 resulted in an 11% fall in tobacco consumption.  As a result of the 2013 excise increase, it was estimated that 210,000 Australians were prompted to quit.

ACOSH made a submission to this review in June 2004. ACOSH has previously made submissions to the: “Poisons Schedule (Standing Committee) NHMRC” 1984/85; “West Australian Poisons Advisory Committee” 1995, and in response to the first discussion paper of the “Review Of The Poisons Act 1964” in 2002.

In 2003 the Commonwealth announced a Review of Tobacco Advertising Prohibition Act (1992), with submissions being due October 2003. ACOSH joined other health and tobacco control organisations in preparing a united and detailed submission to the review process. There has been no report from this review since 27 October 2004.

Executive Summary of the Joint Submission

The Tobacco Advertising Prohibition Act (“TAP Act”) has now been in operation for more than 10 years. While it has been important in limiting the exposure of the Australian public to tobacco advertising through more traditional mass media forms of marketing, it has been largely ineffective in limiting exposure through other channels of communication. These are channels that the tobacco industry has increasingly been turning since the commencement of the Act. In addition, the exposure of the public to the promotion of smoking in the popular media remains an ongoing concern.

Public health groups in Australia welcome the review of the TAP Act and appreciate the opportunity to comment on the issues paper published by the commonwealth department of Health and Ageing as part of the process.

In this submission, we set out the effects of tobacco advertising and provide the rationale for its prohibition. We present numerous examples of ways in which the tobacco industry has continued to promote smoking and tobacco products through the life of the TAP Act, as well as positive depictions of smoking in the popular media.

Finally, we propose a broad approach to the issues that need to be addressed and a set of specific recommendations for amendments which, in combination, would help to ensure that the Act better achieves its object, as stated in section 3 of the Act:

This Act is intended to limit the exposure of the public to messages and images that may persuade them:

The objective is to improve public health.

It seems to us that there are two main issues for the review:

We make a number of recommendations which we believe will, if adopted, enable the object of the Act to be far better met than it is today. These include:

Underlying all of our recommendations is the recommendation that, except where the Constitution prevents it from doing so, the Commonwealth should establish clear and strong laws in relation to all areas of advertising, and not leave open the possibility of weaker regulation in certain States and Territories that the Commonwealth could itself achieve.

There is no justification – other than constitutional necessity – in a country the size of Australia, and with the level of commerce and travel that we enjoy across the country, and given the similarity of marketing practises and incentives nationwide and the national operation of tobacco manufacturers, to leave open the possibility of different standards in different jurisdictions, with Australians being exposed to different levels of “messages and images that may persuade them to start smoking, or to continue smoking, or to use, or to continue using, tobacco products”, depending on which State or Territory they happen to live in or to be visiting at a particular time. (Submission to the Commonwealth Department of Health and Ageing Review of the Tobacco Advertising Prohibition Act 1992)

If you would like to show your support for or comment on existing or proposed Australian tobacco control laws or policies, you can write to your federal Member of Parliament urging their support.