What are electronic cigarettes?

Electronic cigarettes (e-cigarettes) are a battery-operated, handheld device that heats a liquid solution (e-liquid) to produce an aerosol. The user inhales the aerosol in a manner that simulates smoking, commonly known as vaping.

E-cigarettes were commercialised in the mid-2000s and have since evolved rapidly, resulting in a dynamic marketplace and variety in e-cigarette terminology, design, and engineering.

Since 2012, the leading tobacco companies have acquired and developed e-cigarette products, and now own many of the major e-cigarette brands.

There are no quality or safety standards for e-cigarette devices nor nicotine-free liquids, meaning their manufacture, contents and labelling are unregulated.

The liquids used in e-cigarettes:

There is no side‐stream smoke. However, some nicotine is released into the air as the user is exhaling. 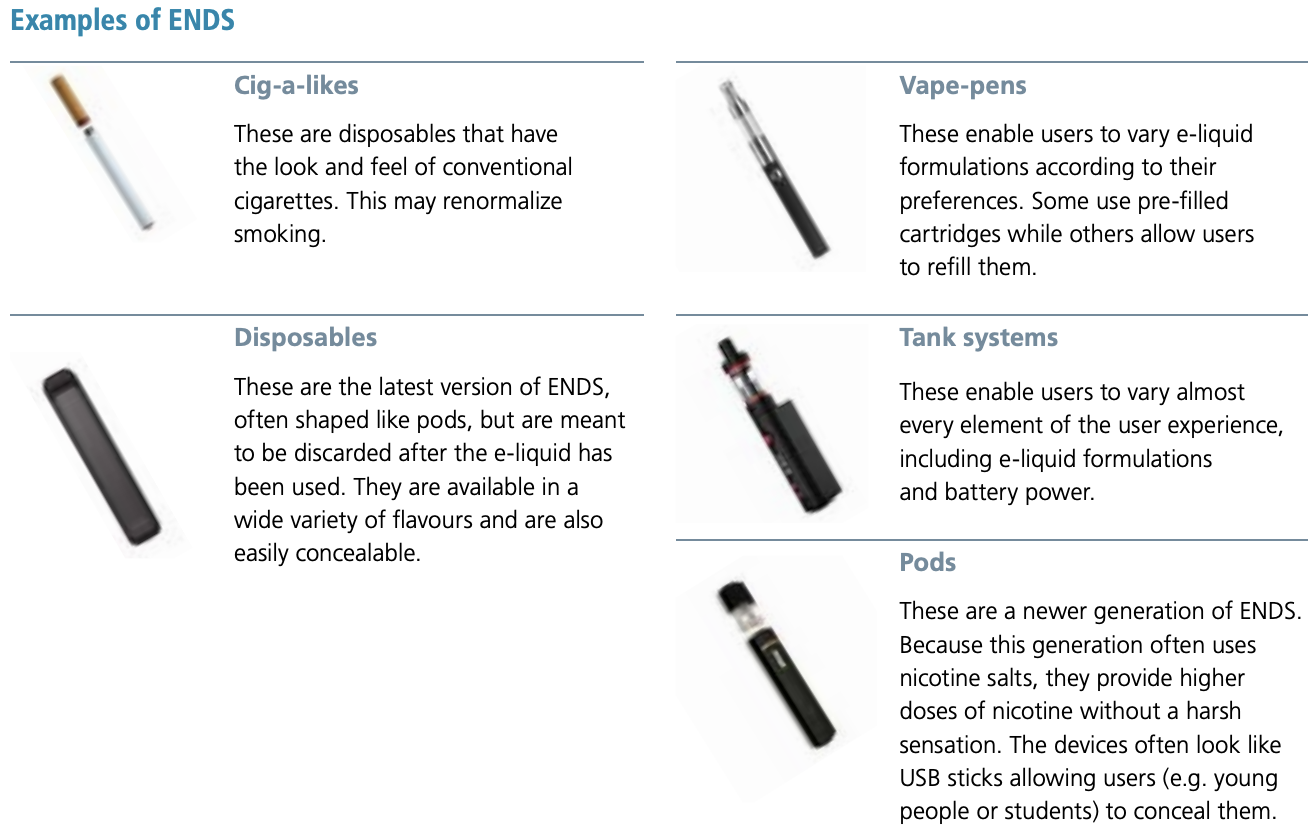 Source: WHO report on the global tobacco epidemic 2021: addressing new and emerging products

For any non-smokers, be they children, young people, or adults, e-cigarettes offer no benefits and present potential for harm from nicotine dependence, exposure to known toxins, and adverse effects for the cardiovascular system and lungs.

There is only weak and limited evidence that e-cigarettes help smokers to quit permanently; most smokers who use e-cigarettes continue to smoke traditional cigarettes. Even low levels of tobacco use greatly elevate risks to health; smoking five or fewer cigarettes a day can cause almost as much damage to the lungs as smoking 30 cigarettes a day. Smokers need to quit entirely to avoid the majority of risks associated with stroke and heart disease.

The Federal Department of Health has commissioned a comprehensive review of the evidence in relation to e-cigarettes conducted by the Australian National University. Its interim findings published in 2020 concluded that e-cigarettes pose more harm than benefit to the Australian population.

Of great concern to public health experts is the growing body of research suggesting a possible relationship between e-cigarette use and the uptake and escalation of smoking among young people.

Nicotine is an addictive drug that has neurotoxic effects on the developing brain. Exposure to nicotine during adolescence, a vital period in neural development, has been associated with cognitive and behavioural impairment and lasting structural changes in the brain.

The evidence regarding the safety of e-cigarettes has been comprehensively reviewed by the following independent organisations:

All these organisations concluded there is insufficient evidence to recommend e-cigarettes as a safe and efficacious method to give up smoking. It is also important to note that there is now increasing evidence of harm attributable to their use.

What is the policy context for e-cigarettes in WA and Nationally?

Australia has a strict regulatory environment for tobacco products and the prohibition of nicotine for use in e-cigarettes. It is illegal to manufacture, supply or sell nicotine e-cigarettes, as required by all states and territories (unless through doctor’s prescription).

Western Australia differs in that the Tobacco Products Control Act 2006 (WA) states a person “must not sell any food, toy or other product that is designed to resemble a tobacco product or packaging.” In 2014, the WA Supreme Court convicted a retailer of breaching the Act for selling e-cigarettes that resembled a tobacco product. As a result of this case precedent, e-cigarettes cannot be sold in WA whether they contain nicotine or not.

Despite strict regulations in WA, evidence indicates retailers are circumventing regulations by facilitating customers to purchase e-cigarette devices, and nicotine products are widely accessible through the internet from companies operating overseas. Approximately 70% of Australian e-cigarette purchases are made online, of which more than 40% use nicotine-containing products.

The recent seizure of 26,000 prohibited nicotine e-cigarettes and e-liquids in NSW shows that retailers have expanded their business interests and are threatening the health of young Australians. For 26,000 illegal addictive products to be seized in one state over only a few weeks shows that the true extent of proliferation and exposure of e-cigarettes to young people may become impossible to control unless governments act urgently.

Recent media coverage in WA has described the growing use of e-cigarettes by teenagers and responses by schools to control their use and distribution.

The Federal Government has conducted three public inquiries in relation to e-cigarettes in Australia since 2017, in response to relentless lobbying orchestrated and supported by the tobacco industry and its front groups.

The WA Parliament also had an Inquiry on Personal Choice and Community Safety (2018), with particular reference to risk-reduction products such as e-cigarettes, e-liquids and heat-not-burn tobacco products.

In each of these inquiries the majority reports supported maintaining Australia’s precautionary approach to the availability of e-cigarettes (as recommended by all of Australia’s health departments, the Ministerial Drug and Alcohol Forum, the Therapeutic Goods Administration and forcefully advocated by Federal Health Minister Greg Hunt). ACOSH played a leading role in orchestrating submissions to all of these Government inquiries.

What is happening to the law regulating nicotine e-cigarettes from 1 October 2021?

E-cigarette products are considered to be ‘unapproved’ therapeutic goods and the Therapeutic Goods Administration (TGA) has not evaluated them for quality, safety and effectiveness.

Provisions in Schedule 4 (prescription only medicine) from 1 October 2021 will permit possession of e-cigarettes containing nicotine only in accordance with a legal doctor’s prescription.

Child resistant closures for nicotine vaping products will also become mandatory to reduce the risk to children of accidental ingestion.

There will be two ways to obtain nicotine e-cigarettes using a doctor’s prescription:

There are NO nicotine vaping products approved by the TGA for smoking cessation.

RACGP’s Supporting smoking cessation: A guide for health professionals states that e-cigarettes are a reasonable intervention in limited circumstances and that the long-term health effects are unknown.

Why is Australia’s precautionary approach to e-cigarettes important?

Australia is a world leader in reducing the prevalence of smoking among young people.

The most recent Australian Secondary Students’ Alcohol and Drug (ASSAD) survey showed that smoking by teenagers in Western Australia is now at its lowest level – only 4.8 per cent of 12 to 17-year-olds had smoked in the week prior to the survey in 2017, down from 20.5 per cent in 1984. There is, however, concern that absence of appropriate strategies and new forms of tobacco marketing may adversely impact on this trend. 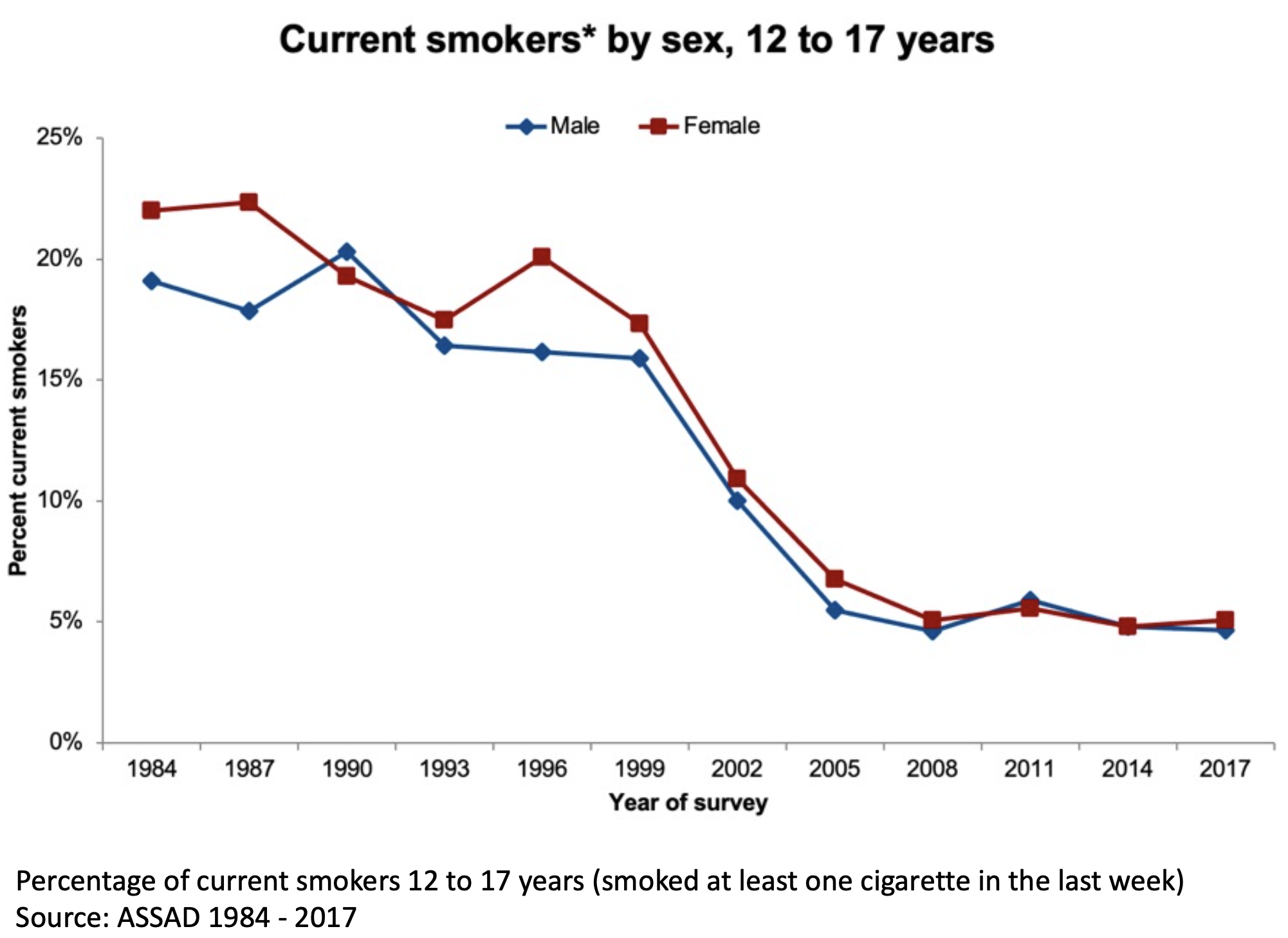 E-cigarettes and other novel products have the potential to undermine current tobacco control efforts by renormalizing smoking and attracting and supporting nicotine addiction among youth and young adults.

Australian Institute of Health and Welfare data from 2019 show the largest lifetime user groups of e-cigarettes by age in Australia are 18-24-year-olds, followed by 12-17-year-olds.

Between 2016 and 2019, the proportion of young adults who were current e-cigarette users (including daily, weekly, monthly or less than monthly) almost doubled from 2.8% to 5.3%.

The recent increased use of e-cigarettes in Australia, particularly among youth and young adults, indicates that legislative, regulatory and policy solutions are required to reduce their illegal importation and sale in Australia. 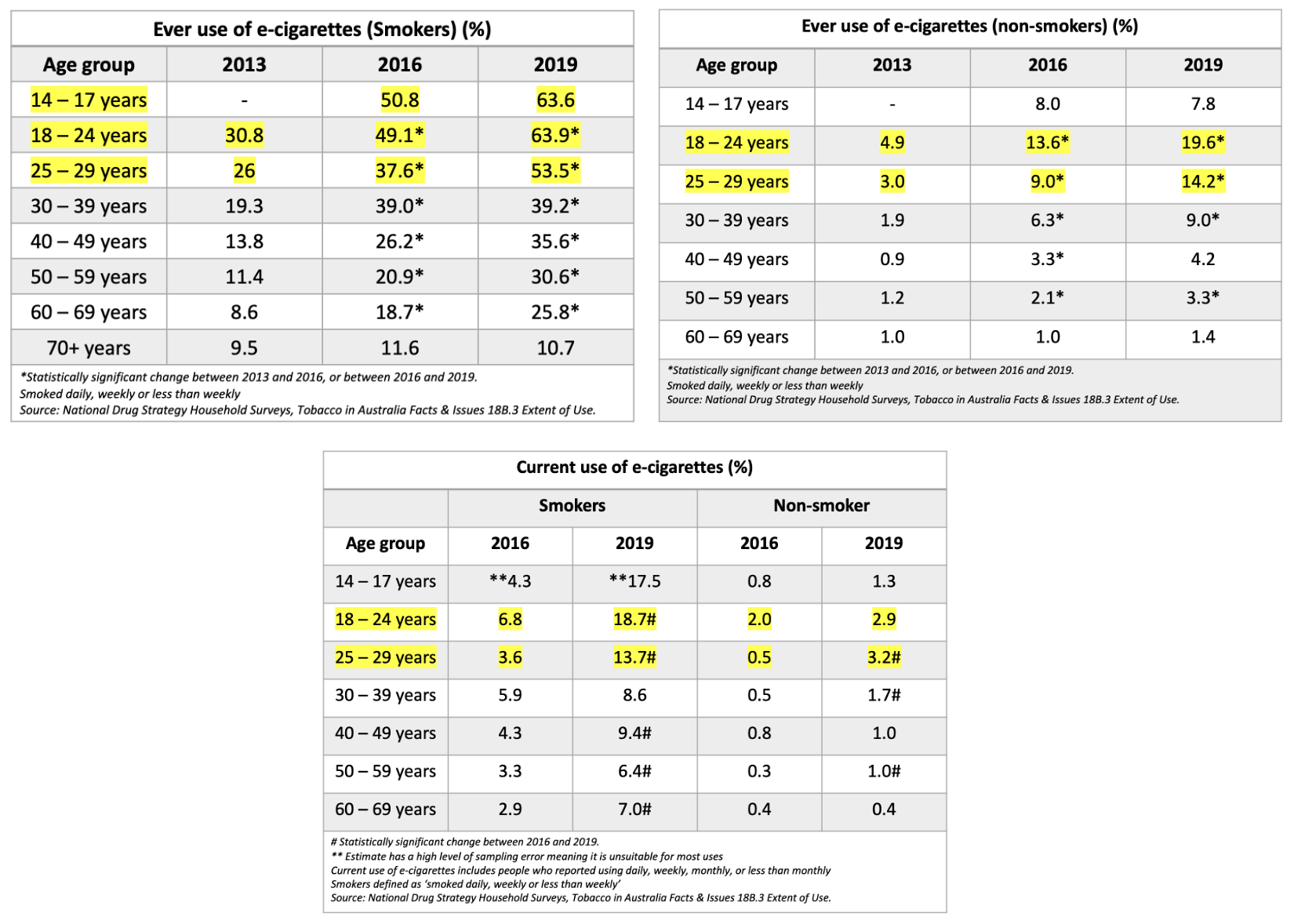 A public health crisis is unfolding, despite the intent voiced by all Australian governments, in communiques in 2017, 2018 and 2019, to address the growing threat of e-cigarettes, and a Commonwealth plan to protect public health through tightened nicotine prescription provisions.

The prevalence of smoking in young people in WA is less than 5%, and leading health and medical organisations do not want to put this major public health achievement at risk. 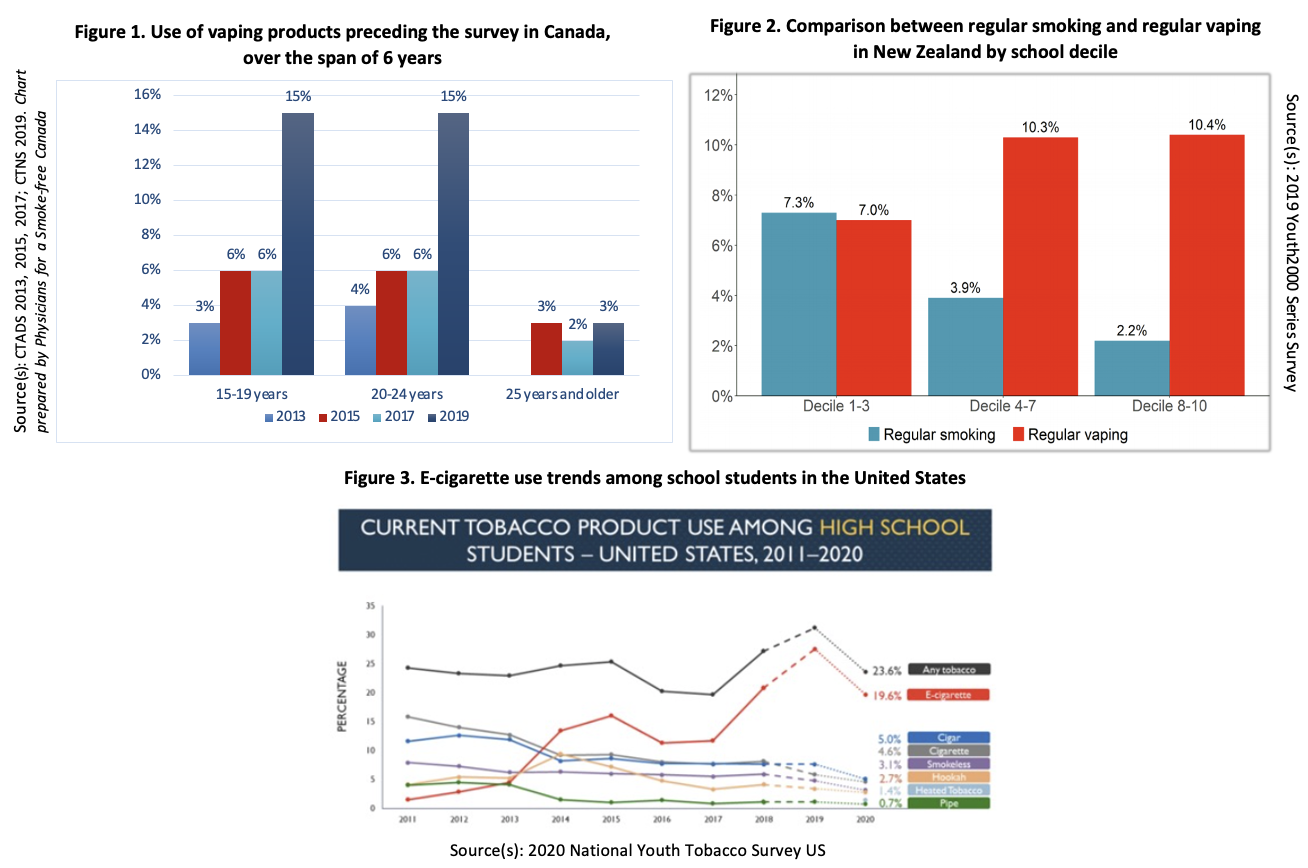 Who is lobbying to make e-cigarettes freely available in Australia?

The main organisations lobbying to make e-cigarettes freely available in Australia are tobacco companies, their front groups, and retailers. Many of these organisations have clear conflicts of interest. 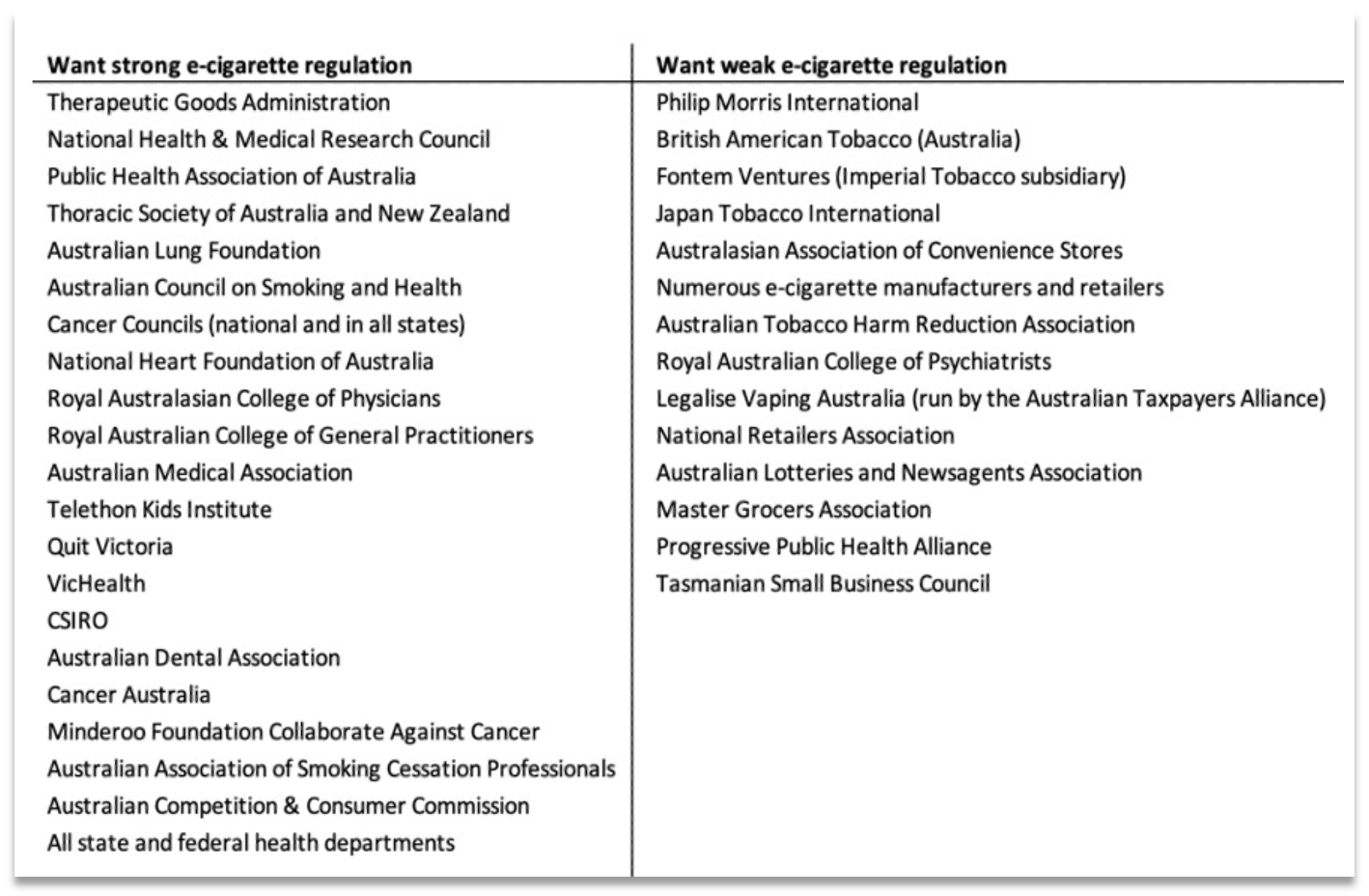 Big Tobacco is especially keen to undermine progress to reduce smoking in Australia, through a range of traditional marketing, lobbying and public relations activities, and new approaches such as the development and promotion of new products.

The tobacco industry in WA and Australia as elsewhere is resurgent and unrelenting in its constant efforts to attract and addict new smokers, and to keep existing smokers addicted. The lobbying activities of the tobacco industry and associated groups needs to be continually monitored, exposed, and countered especially with legislators and policy makers.

Internal Philip Morris documents from 2014 revealed a 10-year Corporate Affairs Strategy that described how they would use the trojan horse of tobacco harm reduction to influence public policy in tobacco regulation. 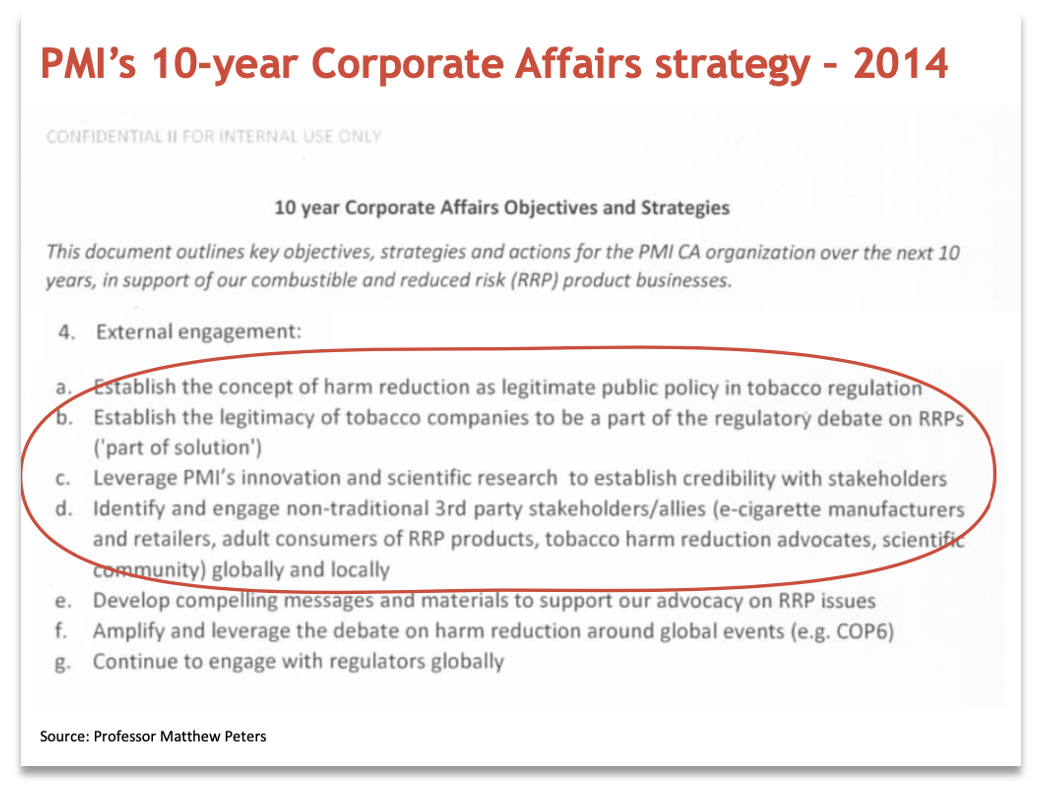 Over the past two decades, novel products claiming to reduce exposure and risk have been introduced continuously, including smokeless tobacco products, e-cigarettes and heated tobacco products (also known as heat-not-burn).

Tobacco company Philip Morris International has made persistent attempts to rebuild its public reputation through public relations and social media strategies including funding to establish the Foundation for a Smoke-Free World to position itself as “part of the solution”, and all the other major tobacco companies have been similarly active in finding new ways to promote novel products, while continuing to promote conventional tobacco products and oppose action that will reduce smoking.

Even with the additional profits from e-cigarettes, British American Tobacco’s traditional tobacco products remain the key driver for the business. Its 2018 Annual Report states:

“As we develop new and potentially reduced-risk product categories, our conventional cigarette business remains strong and continues to grow. This enables us to invest in the development of better and more innovative products, while continuing to deliver strong results and dividends to our shareholders.” 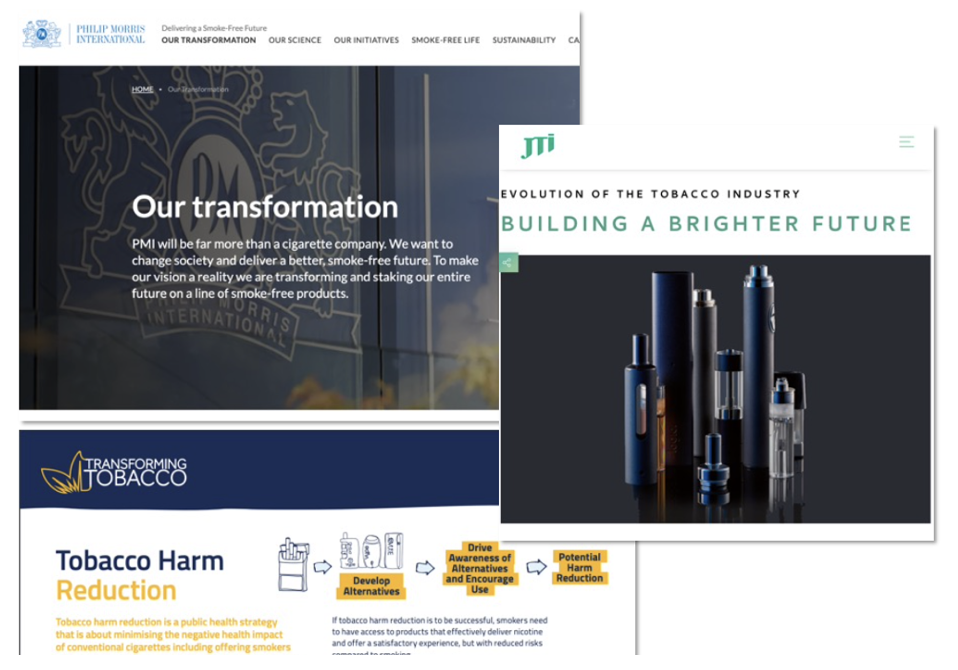 Big Tobacco uses its economic power, lobbying and manipulation of the media to discredit scientific research and influence governments to minimise restrictions on the marketing and availability of tobacco. They are currently spending millions of dollars on lobbying our politicians to support the introduction of novel tobacco products and to oppose evidence-based action, while cigarettes remain their core business.

This lobbying indicates tobacco companies are interested in e-cigarettes being widely available as consumer products rather than a therapeutic product for smoking cessation. 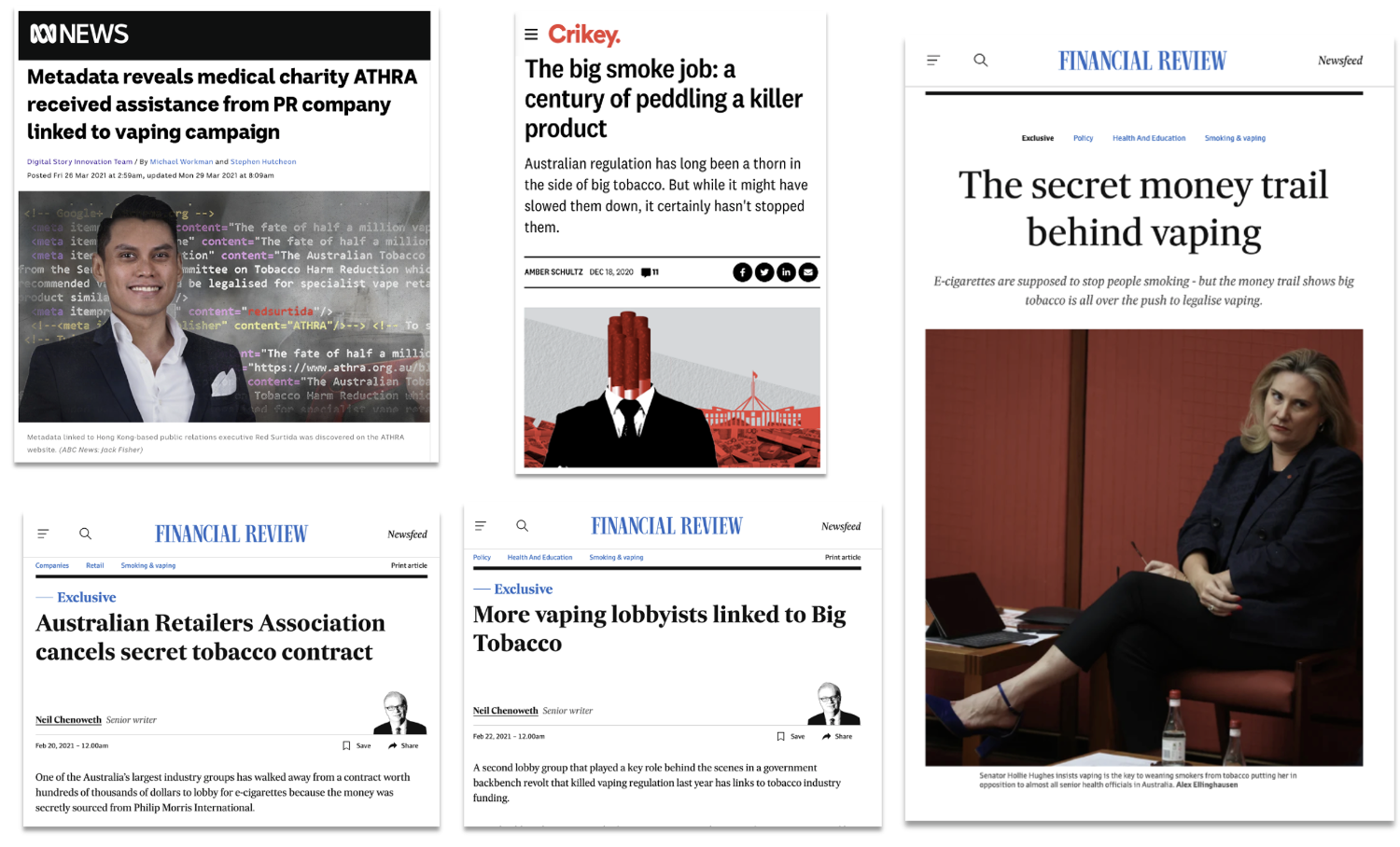 Given the tobacco industry will continue to undermine tobacco control, Governments and public health agencies cannot afford to be complacent. The need for tobacco control is as great as ever, especially given a resurgent tobacco industry. History in WA, and nationally, shows that when this occurs even positive trends can be reversed. Indeed, there should now be a strong focus on stepping up levels of activity so that WA can indeed become effectively tobacco-free by 2030.

What can the WA and Federal governments do to strengthen Australia’s precautionary approach?

ACOSH commends the evidence-based position on protecting the population from the harms of e-cigarettes taken by all governments and health authorities in Australia.

The nicotine prescribing rules from 1 October 2021 will only work as intended if supported by additional effective controls that protect young people from easily accessing e-cigarettes – young people who are not the intended users of medically authorised e-cigarettes but are clearly the intended market for the tobacco industry and retailers.

A comprehensive intergovernmental response is urgently required to build on the new prescribing arrangements to ensure e-cigarettes are only accessed by adult smokers with medical supervision and support for smoking cessation.

ACOSH and its partner organisations have played a leading role in pressing federal, state and territory governments and health authorities to introduce coordinated health protections, including:

ACOSH will hold the WA and Commonwealth government to account to translate this position into regulation, policy and practice, and will continue to expose the lobbying and marketing activities of the tobacco industry.

Why does ACOSH support Australia’s precautionary approach to e-cigarettes?