Big Tobacco and the National Retail Association have jointly been awarded the AMA/ACOSH 2021 Dirty Ashtray Award for their relentless attempts to undermine Australia’s tobacco control programs. 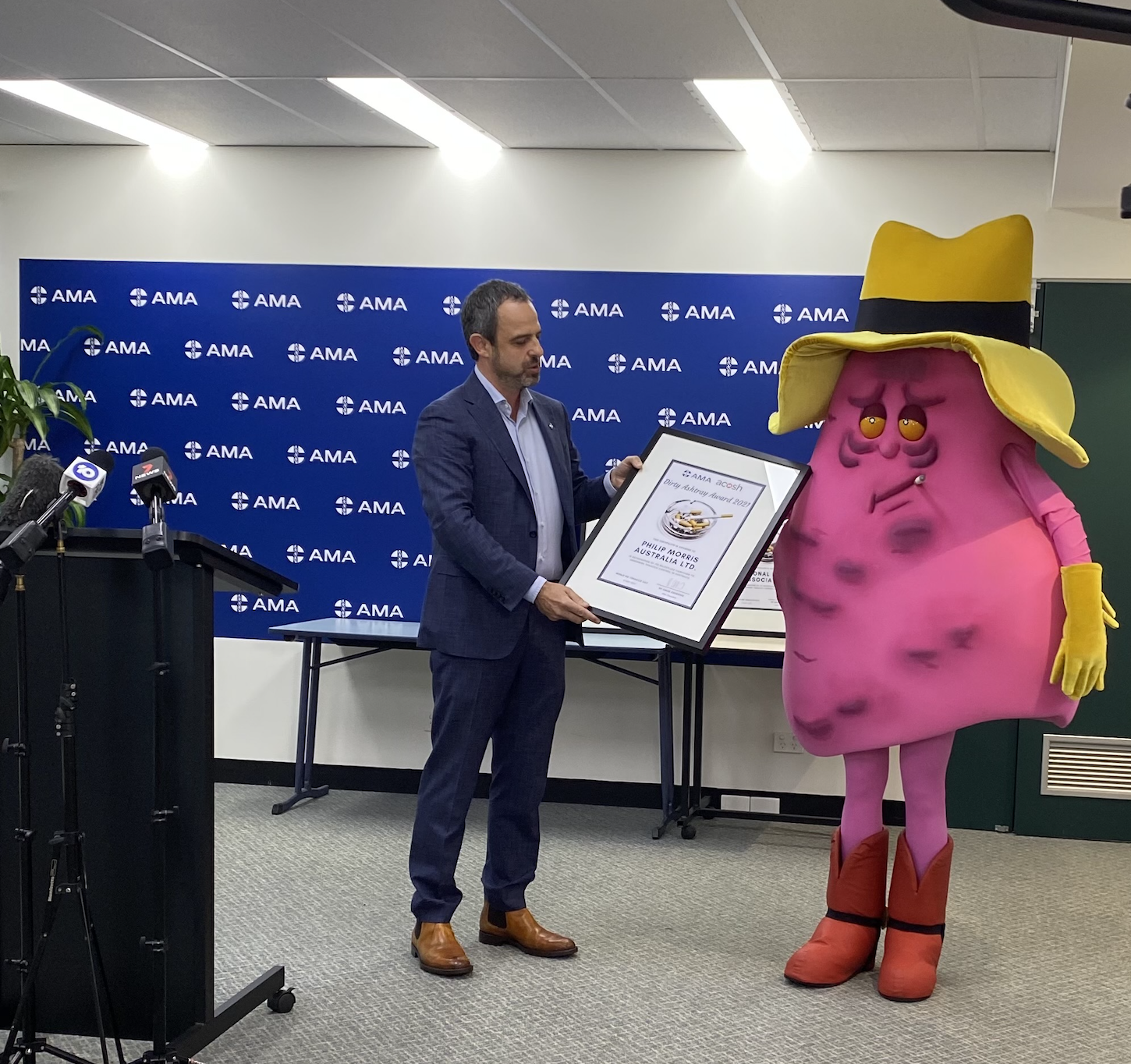 Dr Khorshid said decades of public health initiatives which had put Australia at the forefront of smoking reform were at risk.

“These companies continue to market the world’s most lethal consumer product, that each year kills over 20,000 Australians,” he said.

Dr Khorshid urged all governments to build on Australia’s success over the last 40 years by focusing on proven and evidence-based strategies.

“The tobacco industry uses its economic power, lobbying and manipulation of the media to discredit research and influence governments to minimise restrictions on the marketing and availability of tobacco.

“They are currently spending millions of dollars to persuade our politicians to support the introduction of nicotine e-cigarettes. Nicotine vaping products are growing in popularity among young Australians. Meanwhile the National Retail Association has consistently promoted the policy position of the tobacco industry to make nicotine e-cigarettes available as an ordinary consumer item.

“The AMA is highly concerned about the uptake of these products among young Australians, especially because of the clear evidence that young people who use vaping products are much more likely to go on to smoke tobacco. Philip Morris, British American Tobacco, and Imperial Tobacco all own e-cigarette brands.

“Big Tobacco is also ruthlessly exploiting social media platforms for promotion of their products and using corporate social responsibility activities to polish their tarnished image. They’re undermining the World Health Organization Framework Convention on Tobacco Control to which all Australian governments are signatories.”

Dr Khorshid said the AMA and ACOSH wanted to see the federal government drive a stronger comprehensive national program including:

He said the most effective measure the federal government could take was to run a new hard-hitting national mass-media, anti-smoking campaign during this parliamentary term.

“We are calling on the Health Minister Greg Hunt to spend $20 million in funding which has been set aside to revive Australia’s highly effective National Tobacco Campaign. It’s a tiny portion of the projected revenue of $15.06 billion dollars which will go to the federal government from tobacco excise this financial year, Dr Khorshid said.

The Dirty Ashtray Award is presented each year in conjunction with the National Tobacco Control Scoreboard by the AMA and the Australian Council on Smoking and Health (ACOSH), to put a spotlight on governments, industry, and organisations, which fail to do enough to stop people smoking.

Judges from ACOSH, the Cancer Councils and the National Heart Foundation also allocate points to governments in various categories, including legislation, to track how effective each has been at combating smoking in the previous 12 months.

This year’s summary shows that the best performing jurisdiction is Queensland, and the worst performing is the Northern Territory.

“The Northern Territory Government has been judged to have been the worst-performing Australian government on tobacco control measures over the last 12 months, and shamed with the Dirty Ashtray Award for 2019.

This year is the 25th anniversary of the National Tobacco Control Scoreboard – run by the AMA and the Australian Council on Smoking and Health (ACOSH) – and the Northern Territory has managed to collect the dubious Dirty Ashtray Award 13 times.

In contrast, the Queensland Government has achieved a remarkable hat trick by topping the scoring to win the coveted National Tobacco Control Scoreboard Achievement Award for leading the nation in tobacco control measures.

… “Dr Bartone said the AMA would like to see the Federal Government take on a greater leadership role to drive stronger nationally coordinated tobacco control to stop people smoking and stop people taking up the killer habit.

“The Federal Government has not run a major, national media campaign against smoking since 2012-13, when plain packaging was introduced,” Dr Bartone said.

“Nor has it implemented any further product regulation or constraints on tobacco marketing in that time.

“We would like to see the National Tobacco Campaign reinstated with additional and sustained funding.

“The $20 million announced during the Federal election health debate is a welcome start, but falls well short of the $40 million a year that is needed for a sustained public education program.

“The Government should also implement a systemic approach to providing support for all smokers to quit when they come into contact with health services.

“These key ingredients should be part of the Minister’s commitment, first announced at the AMA National Conference in May, to develop a National Preventive Health Strategy in consultation with the AMA and other health and medical bodies.”

Read more about the performance of the Australian Governments and the full recommendations from the National Tobacco Control Scoreboard here and download the infographic displaying the 2019 results here. 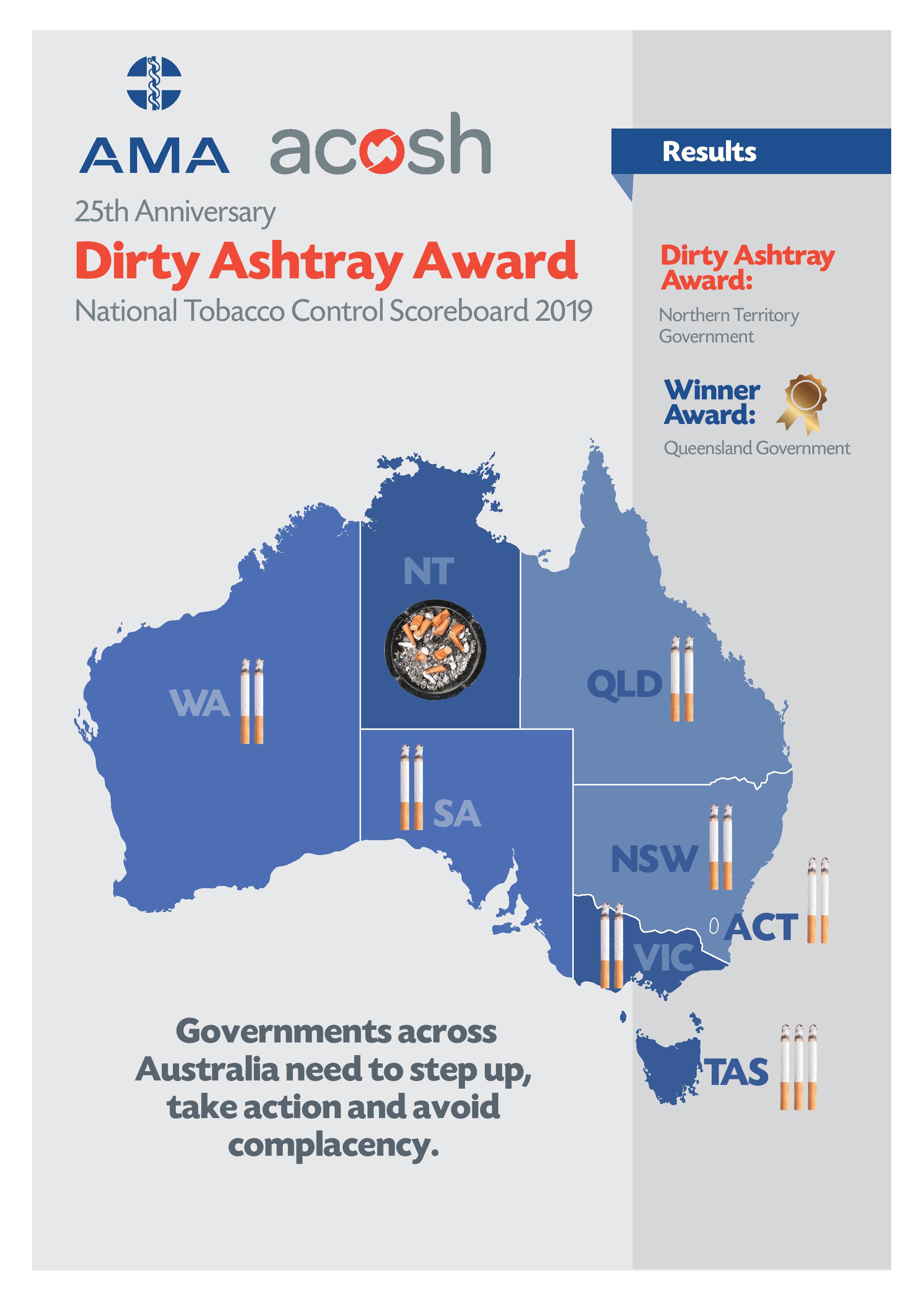 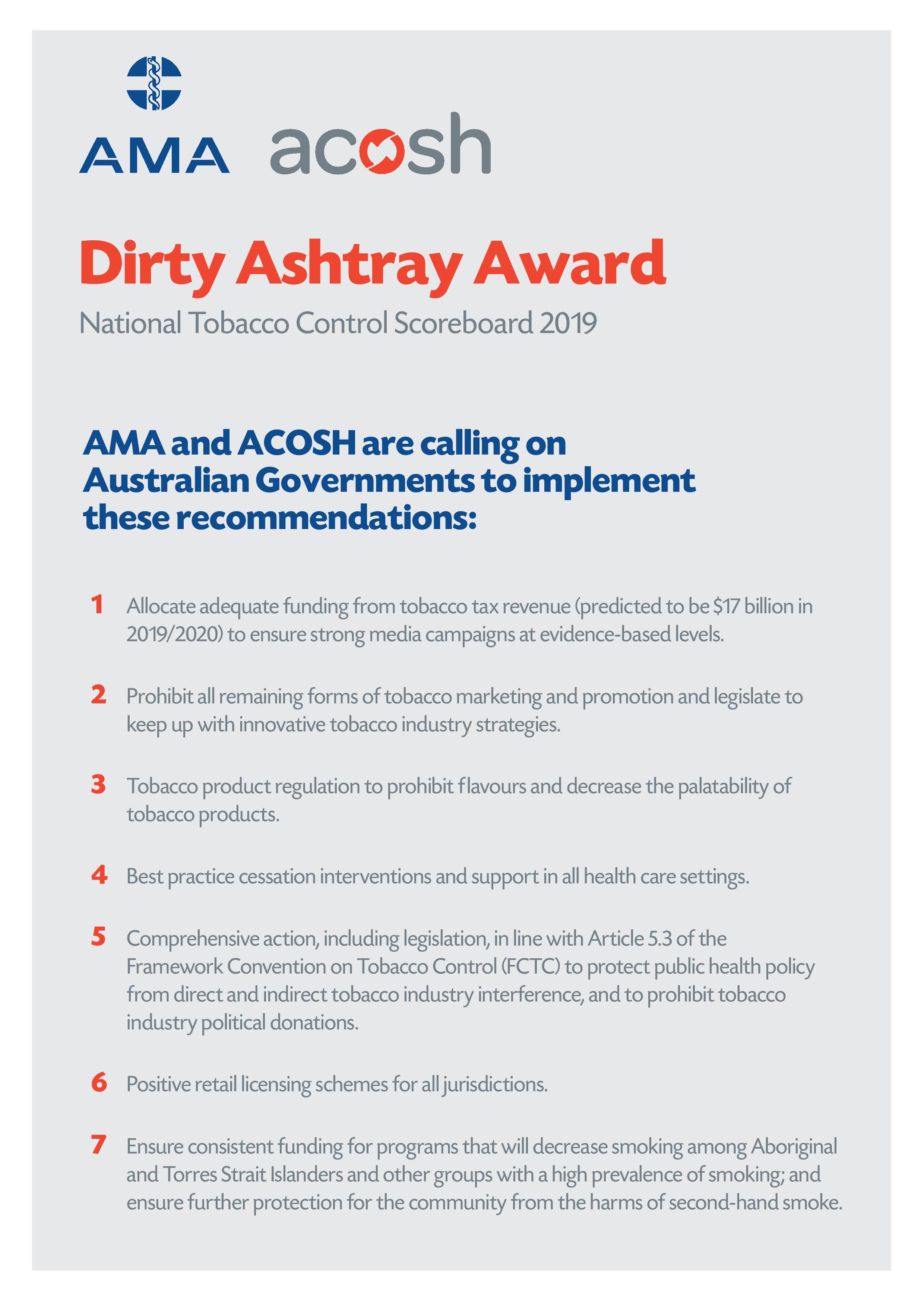 World No Tobacco Day on 31 May reminds us that despite remarkable progress, there is much work ahead to achieve a tobacco-free future for Australia.

The Northern Territory Government, a serial offender, has again received the Dirty Ashtray Award, for putting in the least effort to reduce smoking over the past 12 months.

“The NT scored an E this year, and continues to fail miserably when it comes to protecting Territorians from the harms from smoking,” said Dr Bartone, AMA President.

“This completes a ‘dirty dozen’ for the Territory – its 12th ‘win’ since the Award was first presented in 1994.

“The Queensland Government has won the Achievement Award for the second year in a row, but it still only scored a C – a C for complacency.”

Queensland was narrowly the best of the C-graders, scoring highest in the provision of smokefree environments. It was just ahead of the Australian Government for its appropriate, evidence-based decisions about liquid nicotine and e-cigarettes.

Read more about the performance of the Australian Governments and the full recommendations from the National Tobacco Control Scoreboard here and download the infographic displaying the 2018 results here. 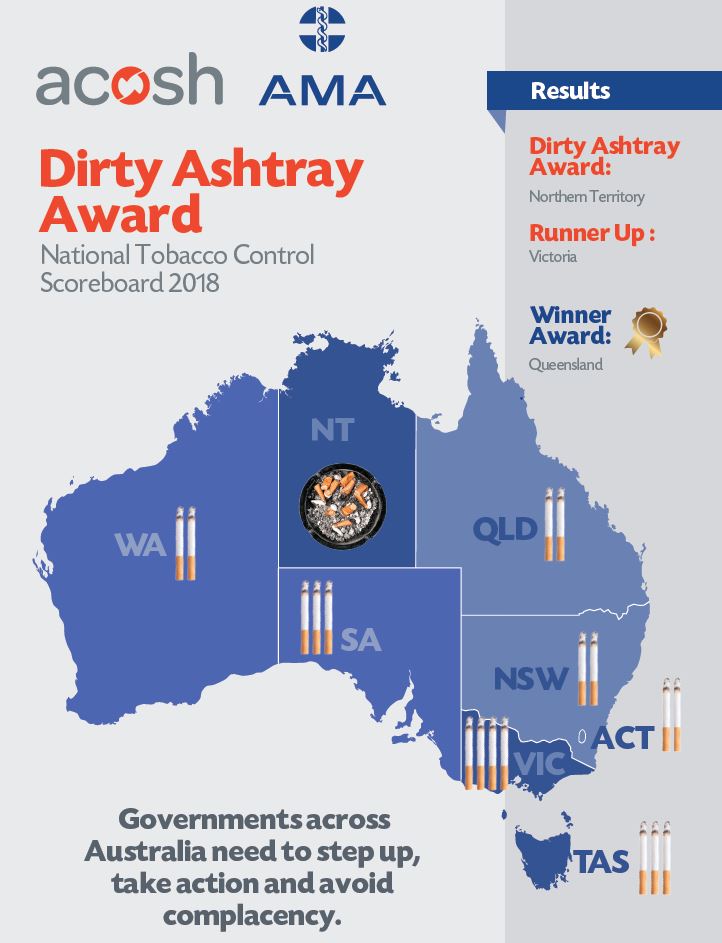 World No Tobacco Day is an important time to reflect on the state of tobacco control in Australia. Each year at the National Conference of the Australian Medical Association (AMA), which coincides with World No Tobacco Day 31 May, the results from the Scoreboard are used to applaud the government who have achieved outstanding results for tobacco control over the past 12 months. It is also the time to present the ‘Dirty Ashtray Award’ to the government which have performed the most poorly.

As in previous years, the results of the 2017 National Tobacco Control Scoreboard were presented at the Welcome Reception Cocktail Party of the AMA’s National Conference on May 26, 2017.

This year, Queensland was named the winner in recognition of strong commitment to tobacco control with exceptional leadership in protecting Queenslanders from exposure to second-hand smoke.  Victoria and Tasmania tied for second last. The Dirty Ashtray Award was awarded to the Northern Territory.   The Northern Territory has clearly not seen reducing the death toll from smoking as a priority. 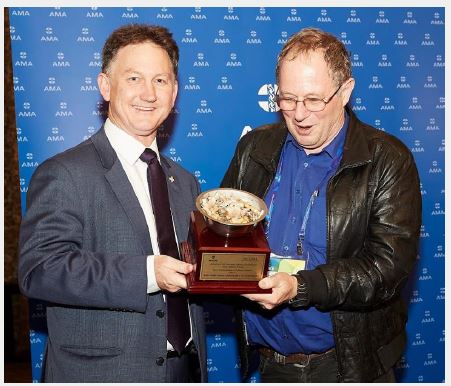 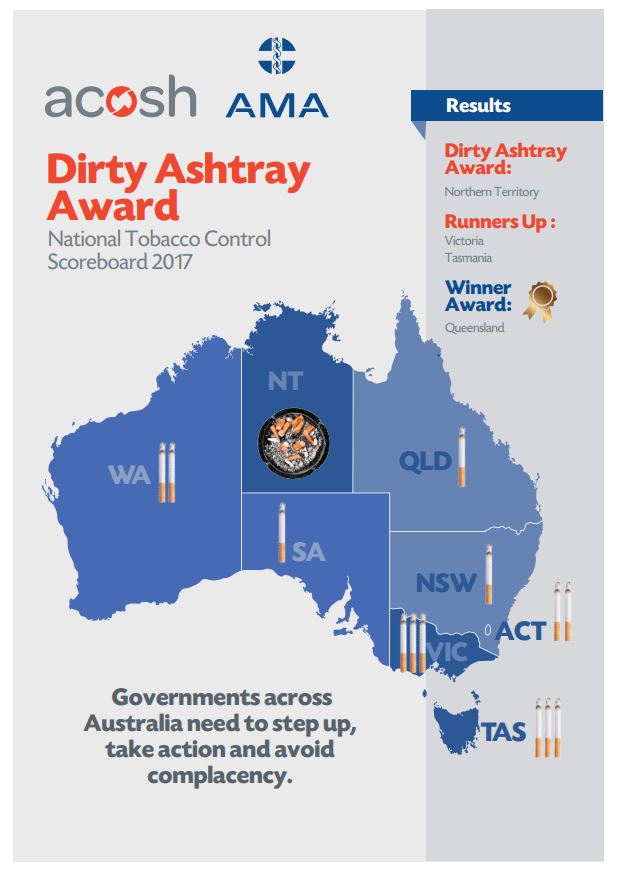 The Australian Government has implemented pioneering tobacco control legislation, including plain packaging and strong fiscal policies. These have been significant achievements, with very welcome bipartisan support.

However, the results are concerning as this year there was no “A” rating, and point to a level of complacency in tobacco control across Australia at a time when the tobacco industry continues to undermine and oppose measures that will reduce smoking. It is extremely important that governments don’t become complacent and continue to implement strong, evidence-base tobacco control measures.

ACOSH and the AMA are calling on governments across Australia to step up, take action and avoid complacency.  Read more about the performance of the Australian Governments and the full recommendations from the National Tobacco Control Scoreboard here and download the infographic displaying the 2017 results here.

Over the years, the National Tobacco Control Scoreboard has consistently had a significant impact, generating action by low-scoring Health Ministers and encouraging those who lead the country in tobacco control efforts.

The 2016 Scoreboard results were announced at the AMA National Conference in May 2016.   The 2016 Dirty Ashtray Award was awarded to the Northern Territory Government.  The Victorian Government was the runner-up for the Dirty Ashtray and was designated the ‘Laggard State’.  While there wasn’t an ‘A’ ranking, the Australian Government won the ‘Achievement Award’ in recognition of strong and continuing commitment to tobacco control with support for plain packaging legislation and world-leading fiscal policies.