People living in rural, regional and remote communities are more likely to smoke at higher levels than those people living in metropolitan areas. The National Drug Strategy Household Survey 2016 indicated that 20.7% of people living in remote and very remote areas and 17% in outer regional areas are current smokers compared to 14% in major cities1. 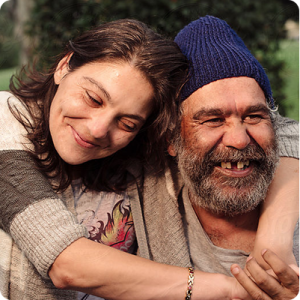 According to the 2011 Australian National Census, there are 105 237 people experiencing homelessness in Australia, 17.5% more than in the 2006 Census2. This is around 1 in 200 Australians. Defined as lacking adequate access to safe and secure housing people who experience homelessness generally have a poorer health status than the general population.

Despite limited research focusing on this priority population group we know that homeless people smoke at higher levels than the general population. One study has reported that in 1995-1996, 77% of homeless people identified as smokers, with rates of up to 93% among those who are street homeless3. More recent research is needed to fully understand the impact tobacco use is having on this priority population group along with more targeted cessation support services.

Research from 2004 and 2006 indicated that around one in five children younger than 15 are cared for by one parent. In 87% of these families the single parent was the mother.

The prevalence of smoking among single mothers is 59% among young mothers aged 18-29 years4. Greater focus is needed to reduce the health and financial burden that smoking is having on this priority population group, including more targeted research and support services.

How can you help?

Take action in your community