Yarning it Up – Don’t Smoke it Up

The Yarning it Up – Don’t Smoke it Up tobacco project, provided by the East Metropolitan Community and Population Health Service aims to reduce tobacco related harm in the adult Aboriginal population of the Perth Metropolitan area of Western Australia.

The project delivers workplace information sessions to service providers focusing on the Yarning it Up – Don’t Smoke it Up; Stages of Change; journey to quit tobacco model, understanding supports available to support a client at different stages.

The project also provides workshops sessions to community members this involves a thorough explanation of the Yarning it Up – Don’t Smoke it Up journey to quit tobacco model, based on Prochaska & DiClemente Stages of Change, 1983. The workshops are culturally appropriate; education is presented as a story which allows participants lead the workshop.  The project provides information sessions to community groups, organisations and others working in the tobacco cessation area.

If your organisation or community group is interested in a workshop, make contact with the team to arrange a time. 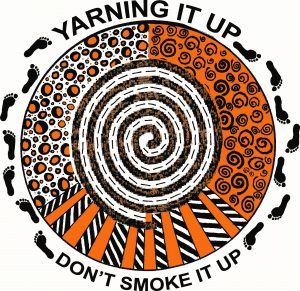 QUITTING TOBACCO IS A JOURNEY

IT WAS A JOURNEY OF DISCOVERY

NOW IT’S A JOURNEY OF RECOVERY